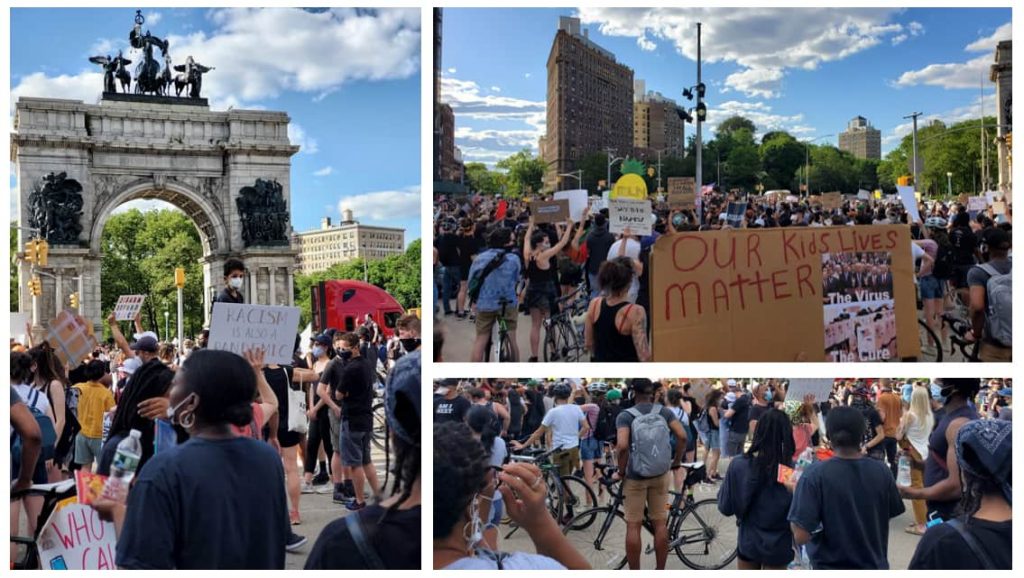 I personally joined Toast Masters (TM) as a professional organization to hone my leadership and communication skills like most people but never did I imagine, I would call it my second home, my family, my tribe. Over the last several months, our club and the interactions we have had have become personal. I feel like we are family now. I love this tribe, and I love our club. Hats off to the leadership!!!

I want to take this opportunity to thank and commend the esteemed leadership team of Bryant Park Toast Masters (BPTM) for organizing a meeting themed around Black Lives Matter. It speaks volumes of the leadership most of them women who has taken leadership to a whole new level. It was an epic meeting where several of our members spoke on what racism meant to them and what they were doing to eradicate it. Racism is certainly another pandemic prevalent both covertly and overtly at individual and institutional levels not just in America but around the world. I really wish and hope TM International recognizes what our club has done in its monthly magazine thereby encouraging other clubs around the world follow our footsteps. As members, we participated wholeheartedly but it was all your decision that brought this epic meeting to fruition. The BPTM leadership deserves to be recognized in my humble opinion. We should publish our story at the least on our website and Social Media Channels. If your action can positively influence the leaders of other organizations like schools, universities, and other TM clubs, I would say we are taking our message from our meeting to a whole another level.

Be it your newsfeed, podcast, radio, or your TV channel – I am certain you are finding plenty of talk about race and racism in the last few weeks. I remember giving my speech on “Uncomfortable conversations: Talking Race” not so long ago where many of us felt un-comfortable talking about race with our friends, our colleagues, or even at home with our family members or kids. And here we are people of all races, ethnicities, genders and backgrounds rise up, standing in solidarity, protesting, marching and chanting together for social justice.

We have come a long way in these past weeks since the brutal murder of George Floyd but we have a longer way to go! A much longer way to attain justice for the human in us!

In the past, I have shared with you all about my tiny non-profit organization called I-believe, I found 8 years ago. We have been creating sustainable communities in Indian villages and a village in Malawi, Africa. But as I read and watched the tragic murder of George Floyd, I asked myself – what am I doing to fight this injustice? In order to do show my support and protest against the brutality of the police force, I joined peaceful protests. I took my 7-year-old daughter also to one of them. Together, we created posters that said” One Human Race”, Black Lives Matter”, Racism is also a Pandemic”.

But I was not done with it. I wanted to do more! I have read and watched books and movies such as “Evicted”, “13th”, and “Harriet” in the recent past. But what did I do after that? Just felt disturbed for a few days and then what….life moved on. This time around, I didn’t want that to happen anymore. I came across Ibram Kendi’s “How To Be An Anti-Racist” when reading an opinion in NY times by Michelle Alexander. Using audible, I listened to some of the chapters over and over again. The result – As a person of color myself, I stand before you empowered, pledging my solidarity to black lives matter. And I want to take this message to one level-up to the world and ensure the conversation leads to action. The overarching goal of my plan is to make sure we don’t lose the momentum we have gained as a society in the last few weeks.

So, What is my Plan?

As some of you may know, I also have a for-profit organization called GBRI where we provide online education to 100s of Engineers and Architects from around the world. I started reflecting on the 360 degree evaluations I have received in the past from my colleagues and peers to come-up with a plan – The strengths of these organizations coupled with what I continue to learn from Toast Masters gave me the courage to come-up with a plan for a new project “ The humanity Project”. Through this project, I intend to share what I learn from my research via speeches, blogs, podcasts, infographics showing visuals of injustices with numbers, and organize online webinars and salons where multiple people like me could share their ideas and last but not least – engage in actions that speak louder than words. 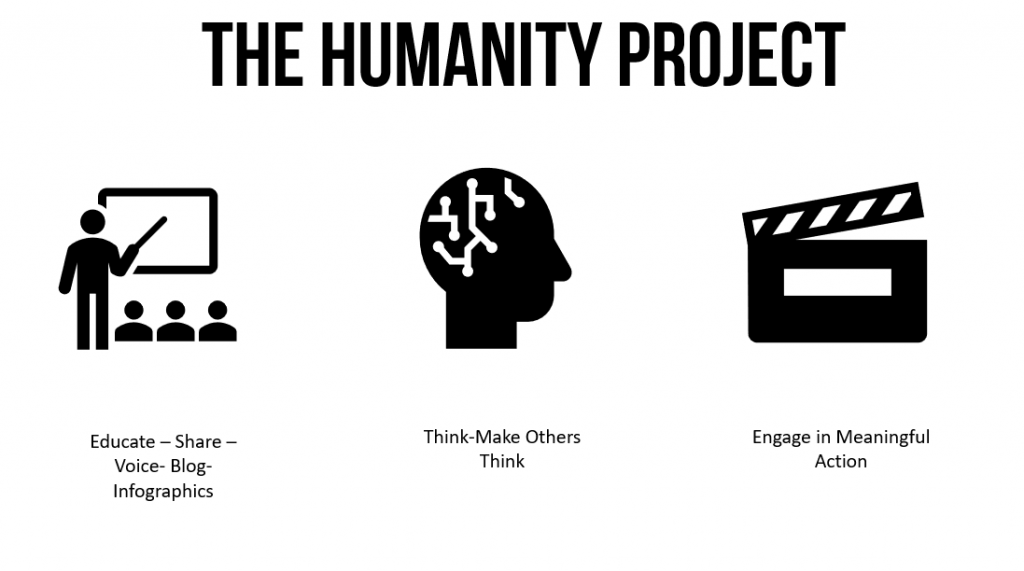 Here are a few examples of some thought-provoking visuals.

1st on Evictions – There are more than 100 evictions per day in NY alone. That in itself is horrendous, but did you know that black Americans are more likely to get evicted in America compared to white Americans.  Eviction rates among black and Latinx adults are almost seven times higher than for white adults according to a study conducted by University of Washington. 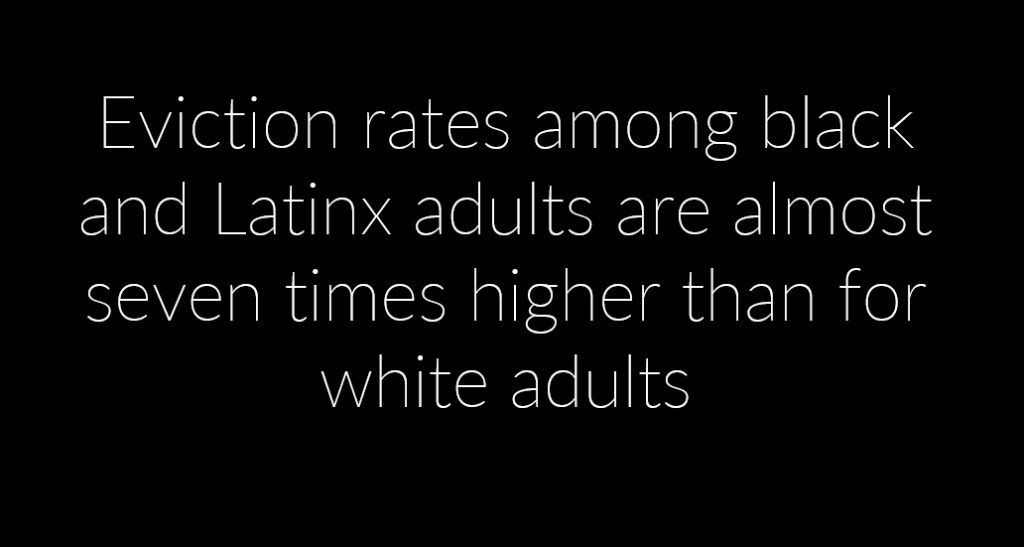 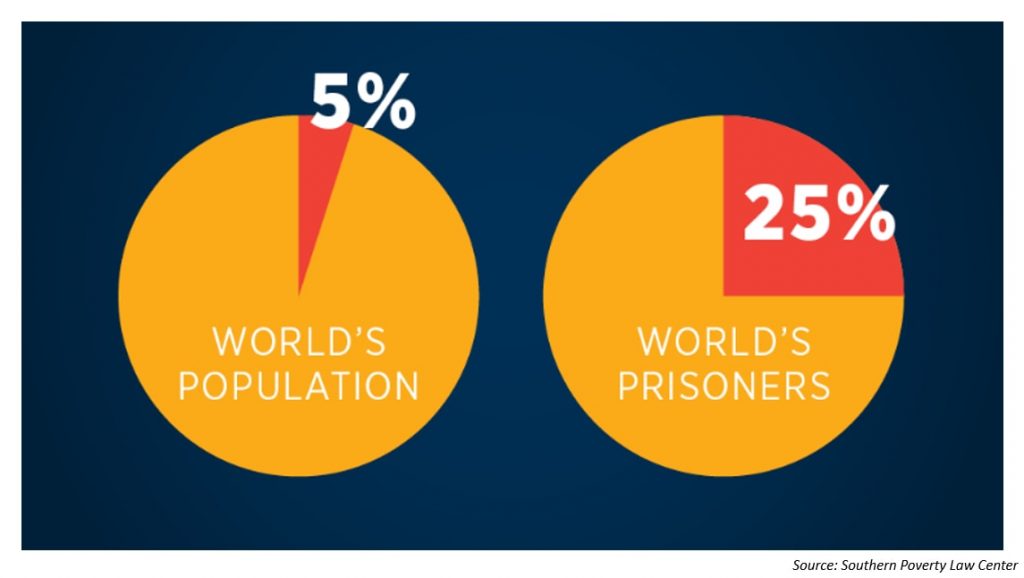 African Americans are incarcerated at 6 times the rate of whites. Drug use is one of the reasons they are incarcerated but did you know that Black people use drugs at roughly the same rates as white people but are 3-5 times more likely to be arrested. 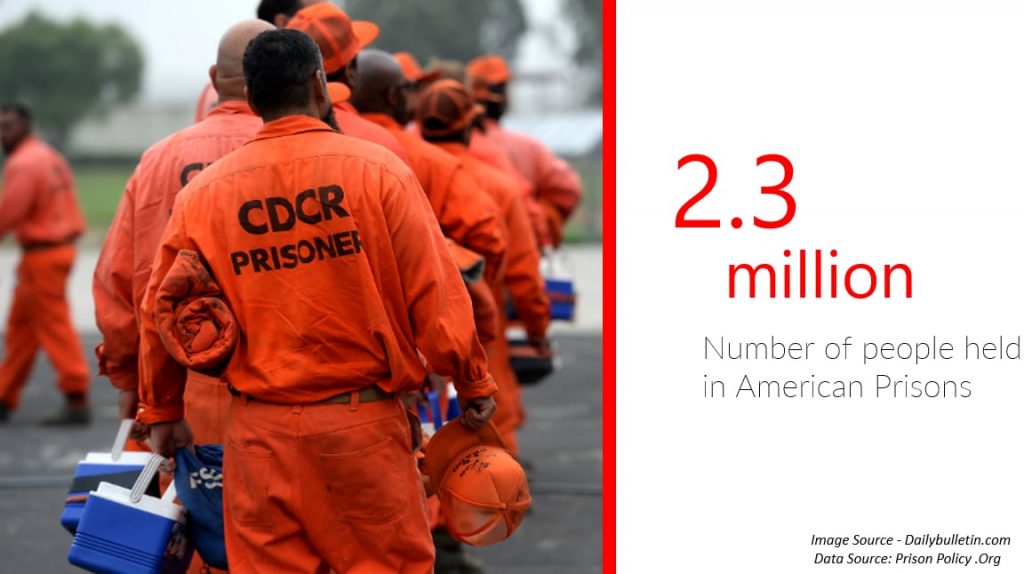 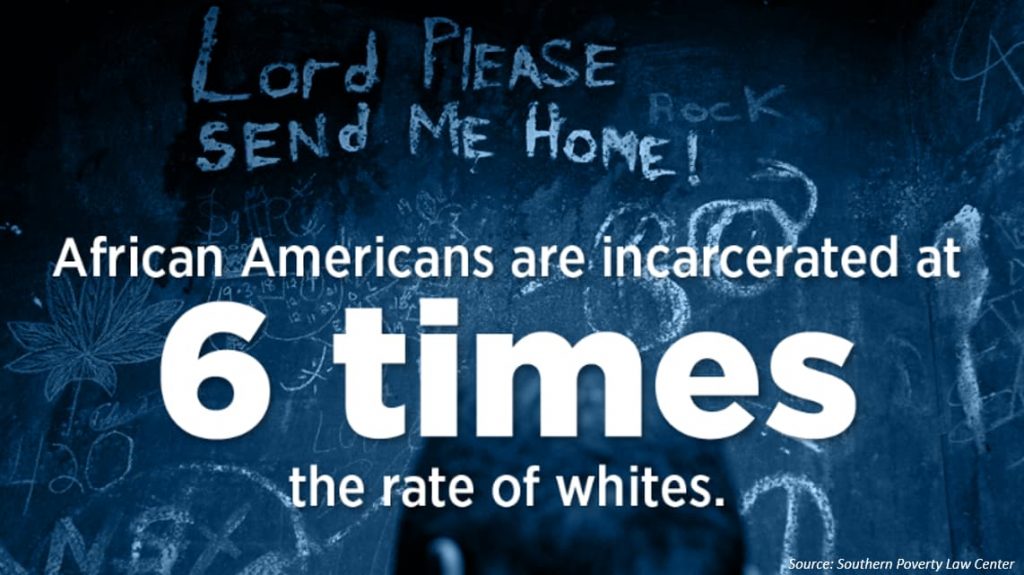 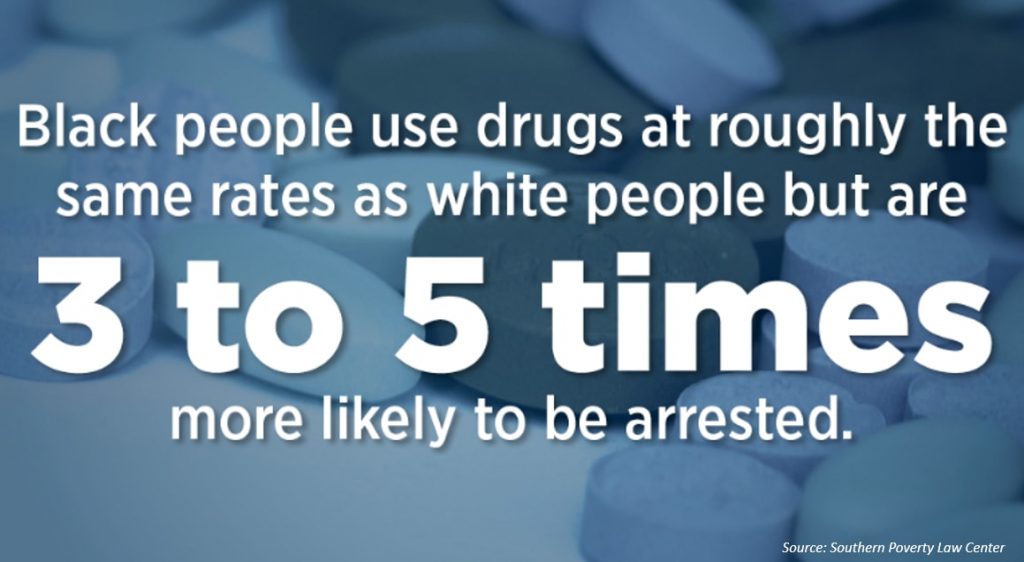 Let’s pause for a second and think about it – Did any of these infographic portray justice? We seldom see these numbers as the newspapers and radios including NPR is keen on reporting on how many points we lost on DOW jones index or NASDAQ? When was the last time you gauged America’s progress based on how many children went to bed hungry, or how many people got evicted from their homes this week? And how many more got incarcerated? Almost never! Shouldn’t that be an Indicator of measuring success for a nation like America? I didn’t grow up in this country but I have tremendous respect for America and its citizens. America can do better!

Like it or not, the reality is – the world we live in has big lens focused on race or whatever term you want to call it. The societies we live-in teaches us that not all skin colors are equal. We all are part of this system where we knowingly or un-knowingly are victims, beneficiaries, or perpetrators.

Whether it is admission to schools, universities, work places, buying homes, buying a car,  or eating at a restaurant, one doesn’t have to squint hard to notice some form of racial discrimination or prejudice happening either on-purpose or involuntarily. I am 39 years old and in my limited travel across India, the Middle East and America – I have experienced it and seen it. Sometimes I wonder if you miss the experience of something just because you are of a particular race. I have wondered what if there was a mask for everyone that looked alike– will we be treated equally at a bar or restaurant?

Now why talk about race?

I certainly believe acknowledging the problem is the first step towards solving the problem. Now, more than ever, the illusions of division threaten our very existence. We cannot deny its existence and therefore must acknowledge it. Once we recognize that racism is a real thing – only way to mitigate it is by talking about it and being more consciously transparent about it. Where do we start this? Our homes! Our homes are the biggest institutions for change. Respecting a fellow human no matter what race they are starts from our homes – where parents get to set good examples for their children.

As some of you may know, I have a seven year old daughter who she stays with me every other weekend. Recently, skin color crept in to our conversation and I acknowledged her observation on how different her friends were and how different her family members were. To her, I had the darkest skin, her, and some of her cousins light or peachy. I asked her if it was okay and pointed out the different colors flowers come in yet all of them beautiful. 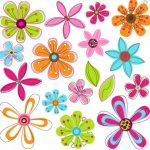 I want her to grow-up with the acknowledgement that we live in a diverse world and have a strong foundation about equality – be it black, white or brown, boy or girl- everyone is equal.  Conversations about race should also be engaged in our schools. Then perhaps we will have a better society that recognizes we look different, we speak differently.

Now -Let’s do a quick exercise  – wherever you are while reading this, look around and see all the human faces around you.

What do you see?  Do you see a white, black or brown person or an Asian, European or Indian or someone just like you. If you see yourself in that person, isn’t it less likely you will try to harm them, talk ill about them or ill treat them? Perhaps it’s more likely you would like them and embrace them.

We may have different religions, different languages, different colored skin but there is more that connects us than separates us. We must find a way to look after one another as if we were one single tribe …One Human Race! 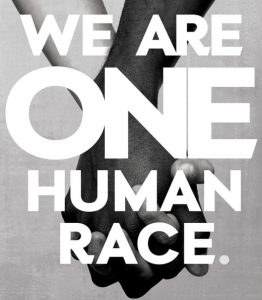 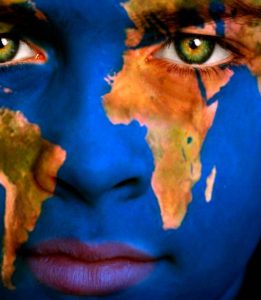