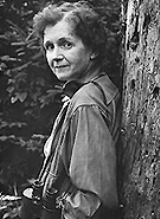 Rachel Carson would have turned 107 today. A pity she is not still with us. Of course not many people reach such an old age, but she died far too young—complications from breast cancer took her away a month before her 57th birthday! What would she think of our world if she had lived? Probably she would have mixed feelings: delight at the progress we’ve made in the sphere of environmental awareness and sustainable living, and yet disappointed that the war between chemical companies and environmentalists rages on, while environmentalism itself has become in many cases a fad, a gimmick, and a commodity. No doubt the rampant “greenwashing” would sicken her. Though above selfish aims, she would also be dismayed at how her name is being misused and her ideas perverted (as it was when she was alive). Rachel Carson has come to represent environmentalism and ecofeminism, and at the same time her views have been criticized as unscientific, idealistic, and impractical.

I confess I was blind to significance of her work for many years. Growing up in a traditional Southern atmosphere, I thought environmentalists were all a bunch of hippie treehuggers. You’d see the irony of this if you knew how much time I spent outside as a child observing nature, specifically insects. But there it was, my narrow-minded perspective. Learning about Rachel Carson in a high school history class did little to dispel these notions, as her name (invariably linked to Silent Spring) was sandwiched between other facts about the EPA and the Clean Air Act of 1970. Like most kids, I memorized the names and dates in order to regurgitate them on the test. Sure, she was important, but I remained skeptical of any “alarmist” and didn’t give her much thought after the exam. A blossoming writer, my heroes remained Charles Dickens and the Russian greats like Tolstoy, Turgenev, and Dostoyevsky. Compounding the irony, Dickens’ depiction of the hazards of industrialization disturbed me, while the Russian writers’ descriptions of pristine forests and fields captured my imagination more than other passages.

College, as it’s designed to do, lifted the scales from my eyes slightly, as I came face-to-face with environmental topics, in science as well as history class. I could no longer ignore the negative impact of humans on this planet, nor assume that Earth’s beauty and resources were inexhaustible. Leaving college, I took further steps towards an awakening. I resumed my hobby of nature photography, which I had abandoned for writing some years before, and this time I focused on insects, spiders, and mollusks. Through hours of studying the “little guys” of nature—the tiny creatures we kill intentionally and accidentally, out of ignorance or carelessness—I realized that I needed to change my way of thinking. Now, after photographing bugs and slugs, volunteering at an animal shelter, ghostwriting beekeeping and gardening books, and working for GBRI, I’m ready to add Rachel Carson to my list of heroes.

Unfortunately, Miss Carson is also on others’ lists of villains. One of the worst criticisms of Silent Spring comes from libertarians, chemical companies, and even scientists, who claim that the book advocates the complete ban of DDT, resulting in the deaths of millions of people due to mosquito-borne malaria. Basically, they blame Carson for those deaths, as though she were a mass murderer! In fact, the use of DDT to combat malaria was never banned in the US, and if in some countries it was, the reason was that it no longer proved effective. Similar to other insects, mosquitoes can develop genetic immunity to pesticides in the course of their short life cycle. However, some experts believe that the agricultural ban (in other words, the specialization of DDT) has actually slowed down mosquitoes’ resistance to DDT, so that the pesticide remains effective for battling malaria.

Miss Carson is not alone on the chopping block. Other environmentalists, carrying on her legacy, are under constant attack from those who call them fanatics, out of touch with reality. Perhaps some members of the cause do fall into this category. But in order for the cause to stand the test of time, without radically diverging from Carson’s principles, we need balance. This is what we should remember Carson for: her balance of environmental awareness with practical reality. Yes, humans leave a mark on the earth, but so do moles, beavers, elephants, birds, and locusts. We simply can’t exist without making an impact; it’s inevitable. While we can limit this impact, we can’t eliminate it—not without eliminating ourselves.

Some may think the Earth would be better off without humans, but we’re here, and Carson accepted this. She loved nature and wanted to protect it from human excesses. She would agree that we shouldn’t ban every synthetic product in sight, but carefully weigh the risks and benefits, and look for alternatives. If those can’t be found, we must use the minimum of what we have until they are found. Most of all, she wanted us to stop and think about the causal relationships between our actions and environmental changes.  She warned us that, without environmental stewardship, one day there would be no birdsong to herald the arrival of spring. Now critics believe that her “alarmism” has consigned millions to death, creating an entirely new “silent spring” where human voices are hushed. When will we stop blaming her for something she did not cause? Please forgive us, Miss Carson! You do not deserve to have your name mentioned in the same breath as the word “genocide.”